1 on 1 with: Monica Schnitger 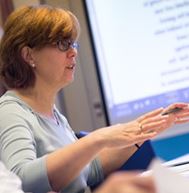 As Founder and President of Schnitger Corporation, Monica Schnitger helps companies to understand the impact of engineering IT: CAD/CAM, CAE, PLM, AEC, IoT and related technologies. She helps to explain what these are, how they affect product or asset creation and operations, and how businesses can best implement these tools, to technology buyers, investors, and developers.  Ms. Schnitger holds a B.S. in Naval Architecture and Marine Engineering from MIT and an honors MBA from the F.W. Olin School of Management at Babson College.

We recently had the opportunity to catch up with Monica and get her opinion on a few topics of interest.

Good morning Monica. Thank you for taking a few minutes to share your thoughts on a few topics with us.  Can you tell us a little about your background and how you got to where you are today?

As you noted, I’m a naval architect. My first job out of college was at Bath Iron Works in the US, where we built ships for the US Navy. Part of my introduction to the shipyard was a rotation through all of its main departments (well, not the production trades — they knew not to give me a blowtorch!) including the loft. Lofting, in shipbuilding, is creating the instructions that turn flat pieces of metal into the complex curved plates that make up a hull. It’s an incredible skill that was just being computerized back then — and I learned how to use a very early CAD package to nest the parts for cutting. I didn’t get to stay in the loft, but that was my introduction to CAD/CAM — and I was hooked. Moving through the departments also gave me a great perspective on how engineering and design data is used, mid-used and ignored. That led to a long stint at Computervision, an awesome CAD company that spawned lots of others that are still around today. Then an MBA, then being an industry analyst at Daratech — and today, doing that on my own.

That’s quite a journey.  Was there anyone in particular who was a significant influence on your career?

Those guys at BIW, who thought a girl couldn’t be an engineer. Being one of a very few of a kind makes you want to prove yourself —or crawl into a hole, another very understandable reaction. I wasn’t ever going to do that, so I worked hard to understand the yard, its processes and how technology could have an impact.

Before we dive into the interview… the engineering community lost one of its most respected members several months ago.  I believe that you knew Bruce Jenkins as a friend and colleague. Can you take a minute to share your thoughts?

Yes, Bruce was a colleague for many years at Daratech. He was one of the smartest people I’ve ever met, funny, and insightful. He leaves a huge hole.

OK, let’s get into it. Can you tell us a little about your organization?

As you said in the intro, everything we do at Schnitger Corp aims to explain technology and use cases. Too often, there’s a mismatch — the coolest technology that doesn’t solve a real problem, or a problem that is still in search of an IT-based solution. Buyers have so many choices today; I help them weed through it all.

Let’s focus a little on engineering simulation.  What are you seeing as some of the industry’s biggest challenges from an end-user perspective?

Honestly, how to do more simulation, better. CAE has been around, commercially, since the 1980s — and before that, in labs and on a more DIY basis. The processes for using it haven’t changes much since then it’s still often a substitute for bend-and-break physical testing. That (and the physical testing) are extremely important — but CAE could and should be used much earlier in the design process to help identify alternatives that simply won’t meet the end objectives for load or efficiency or some other metric. We can use generative tools to help come up with design alternatives. We can use optimization to narrow down a huge set of possibilities to the few to investigate further. We can simulate new material types, add costing and manufacturing techniques into the concept phase of a design — there’s so much potential that’s not being used.

There are many new and exciting application areas for simulation. Could you comment on these and what that means for the simulation market in the future?

I just listed a few — but what they mean for the market is the potential for robust growth, as simulation gets into more parts of an enterprise than ever before. As one example, a lot of configured-to-order products are sold with sales processes that include a visual —this is what your semi-customized object will look like. What if that sales rep could also run a simplified simulation to say, I don’t think you want that because it’s not as efficient to operate as this other alternative. The sales rep isn’t an analyst by any means, but an analyst created an app that can be used during selling. We get a product the enterprise is set up to deliver, and a customer who knows exactly what they’re getting. Then maybe move that data into a support situation, where we can maintain the product using physics to determine wear, how much usable life the product has left, and so on. It’s a very exciting time in simulation because hardware, software, and connectivity are opening so many possibilities.

What about vendors?  How do you think they are responding to these new market demands? How much is real vs hype, in your opinion?

We’re very early in a lot of this, and like most technologies, it’s not evenly distributed across industries or geos — or even companies within the same vertical or location. Vendors of course see these opportunities and are working with key customers to make these visions a reality, but it also comes down to users to see the potential, and demand that their vendors build tools to support those visions.

You’ve had your finger on the pulse of this for some time. Are things where you thought they would be by now?

In many ways, yes — compute power is making many things possible in a more reasonable timeframe. And software is moving forward in awesome leaps for multiphysics and ever-more complicated algorithms. But in other ways, no. I’m always surprised at the reluctance to use more cloud capacity —we bank there; why can’t/don’t we do more CAE there? Perhaps the one good thing to come out of the COVID epidemic is the realization that we can work with remote resources — I don’t see that reversing.

Where do you see things five, ten years down the road?

We’re going to keep going on the digitalization path; there’s no going back. Making paper information, digital, is just the first step — Using that huge amount of data to inform decisions is the next big step. We have so much available to us; using machine learning to help analyze it all will change a lot of work processes.

It seems like every month there is an acquisition announcement.  Do you believe that this is a good thing for the industry?

It is and it isn’t. Many early CAE founders are looking for an exit; having their companies be acquired gives those products, employees and customers a new future. And, of course, acquisition is a time-honored exit for lots of younger entrepreneurs, too, so it’s one mechanism to spur innovation. But it also makes it harder for users to advocate for buying their one special piece of software, when the company has standardized on a large vendor. I think the most important thing to realize that it’s not new — CAE has been seeing this for decades as companies acquire to add new physics and other capabilities more quickly than they could be via in-house R&D.

Democratizing Simulation is all about making simulation more accessible for non-experts while allowing companies to fully leverage CAE resources and investments.  What do you see as the primary barrier(s) to democratization and for simulation adoption/usage in general?

Education. We still too often see simulation as something done by experts in another department. We need to teach (in school and on the job) how to make simulation a routine part of every designer’s daily tasks.

How essential are democratization and automation to the new simulation application areas?

Automation is key, especially for newer users. If we can remove some of the repetitive tasks (where mistakes often creep in), we can more quickly create the confidence that they did it correctly, and that we can trust the results. That will lead to more widespread usage, and the cycle continues.

How could an organization like Rev-Sim provide unique value?

Keep up the educational outreach. It’s critical that simulation users, their managers and the people who are thinking about trying it, understand what they need to be successful. It’s no longer a PhD, but a basic understanding of the tools and their limitations — and they need a deep, physical understanding of the object they’re designing. They need training and mentoring, and maybe some assistive tech like meshing automation. And maybe a backup expert to do final check that everything was done correctly.

Thank you Monica, you’ve been very generous with your time. Before we close, can you talk briefly about why and how a company might want to engage with an industry analyst such as yourself?

Industry analysts thrive on information. So, if you’re a vendor, keep me on your email blast list. If you’re a simulation user (or their manager), ask me a question — if I know the answer, I’ll share it. Sometimes that’s via a user conference presentation or webinar. and sometimes its via something more complicated like a whitepaper, but often, it’s a simple email.

OK, last question. Enough about work… tell us a little about yourself.  What you enjoy doing in your spare time, interesting hobbies, and so on.

I love the outdoors. When I’m not on my computer, I’m likely to be outside, enjoying the woods somewhere! And when I’m not doing either of those, I’m probably in the kitchen, cooking up something tasty to fuel the next adventure.

To learn more about Schnitger Corporation visit their website here.